NEWLEVLS is an early example of a registered Wolfenstein 3D mapset. It was created by Jill Gallup and released in October 1992, although the file modification dates suggest that the maps themselves were finished earlier on - 24 August, to be exact. The mod features ten maps made from scratch and not much in terms of any documentation. Plenty of deaf guard floorcodes though. 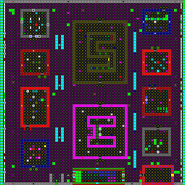 THE masterpiece
Add a photo to this gallery

Retrieved from "https://wl6.fandom.com/wiki/NEWLEVLS?oldid=15845"
Community content is available under CC-BY-SA unless otherwise noted.